When done correctly, a prenuptial agreement is an effective, proactive way for a couple to plan for various contingencies. These agreements can provide certainty amid normally uncertain events like divorce, disability or even a lottery win. By spelling out who gets what property when certain events occur, the possibility of conflict over assets is reduced. 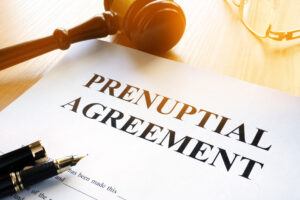 Arizona’s Uniform Premarital Agreement Act controls how these agreements are created and what makes them enforceable. The Act states that a prenuptial agreement is valid if it meets these requirements at the time it is signed:

The prenup must be signed prior to the exchange of wedding vows at either a religious or civil ceremony. The agreement becomes effective only if the marriage becomes official. So if two people sign a prenup but later call off the marriage, the prenup is void.

When a couple with a prenuptial agreement in place gets divorced, one of two things can happen. In one case, both parties agree to go their separate ways and divide things according to the terms of the prenup without challenging it in court. But in the other case, one spouse seeks to challenge the validity of the agreement.

In this latter instance, the court will closely examine the premarital agreement and all the circumstances surrounding its signing. Testimony may be heard about each spouse’s honesty, mental state and behavior at the time of the signing. If the judge decides that the agreement is not enforceable, it will be set aside and the divorce will go on as if the agreement never existed.

In making this determination, the judge will be guided by the Uniform Act, which specifies that an agreement is unenforceable if the party challenging the agreement can prove one of the following:

As part of proving unconscionability, it must be shown that the challenging party did not receive full and fair disclosure of the other party’s property or financial obligations and that they could not have had adequate knowledge of such property and obligations otherwise. Challenges based on unconscionability are the source of much litigation, precisely because lack of knowledge or disclosure are arguable points of disagreement. However, clear and concise language in a well-drafted agreement can usually defeat such challenges.

Clark & Schloss Family Law, P.C. handles all aspects of premarital agreements. Our attorneys can draft an agreement for you, or represent you in court if you need to enforce or challenge an existing agreement during divorce. To arrange a free consultation with our Scottsdale, Arizona legal team, call 602-789-3497 or contact us online at your convenience.