When people talk about divorce, they usually understand that each former spouse is likely to walk away from the marriage with a share of the assets, whether it’s half or some other percentage. But what may not be discussed as much is the fact that the couple’s debts also go through the division process, so that each spouse could end up with responsibility for paying some of the other’s debts. 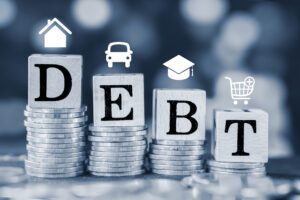 Generally, debts incurred by a spouse prior to marriage or after the filing of a divorce petition are classified as separate, which means they remain the obligations of the spouse who incurred them. For example, if your spouse owes student loans that were incurred before your marriage, it is overwhelmingly likely that the loans will not be assigned to you in divorce.

Most debts are tied to particular assets. Car loans and home mortgages are examples. Judges typically assign the debts to the spouse who is awarded the asset. So if you are awarded the family home, you will also be responsible for the mortgage. In this example, the final divorce decree would likely require you to refinance the mortgage to remove your former spouse’s name. On the other hand, a forced sale of the family home during asset distribution would require splitting the asset value and the debt.

However, it is quite common for one spouse to incur debt individually in his or her name during a marriage. Even though only party is the signer, the debt must be considered part of the marital community. Still, the court has discretion to assign debt to one spouse and to offset the debt with other community assets. It can be helpful to make lists of all debts incurred during marriage by either spouse and then total up the outstanding balances to see who owes more. This can lay the basis for a fair division of debts adjusted by assignment of asset value.

Debt assignment and offset is just one of many possible ways to resolve the community debt issue. Another is for both spouses to pay off debts as much as possible during divorce. Paying off debt can be done by using money in a bank account, selling your home and using the proceeds to pay debt, or various other methods. Your attorney will find the approach that makes sense for you.

If you are worried about becoming liable for your spouse’s debts during divorce, call Clark & Schloss Family Law, P.C. in Scottsdale, Arizona. Our attorneys have decades of divorce and property division experience and we’re ready to help you get through this. Please call 602-789-3497 or contact us online to schedule a free consultation.