Divorce can be particularly difficult for a couple’s children. The stable home environment and loving relationships they have experienced are suddenly upended and the future seems uncertain. The effect on the children is even worse when they are put in the middle of a custody fight. If your spouse is being combative or unreasonable in coming to terms, there are positive actions you can take to improve your chances for a meaningful custody arrangement.

First and foremost, you should keep in mind that judges award custody based on what is considered to 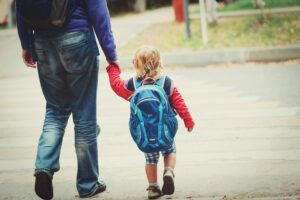 be in the children’s best interests. Among the factors judges consider in deciding custody are:

Also considered are negative factors, such as whether either parent has misled the court or engaged in other bad behavior in efforts to win custody. Therefore, pursuing child custody too aggressively can adversely impact your chances of success.

To the extent possible, avoid confrontations with the other parent over the issue. Communications about child custody should be handled through your attorney or through another intermediary. Sometimes, one parent will give up something else of importance in return for a more favorable custody arrangement.

If there is any hope of settling child custody in whole or in part, it will take the willingness of both parents to compromise. The goal should be to create a parenting plan that allows both of you to be actively involved in raising your children. Possible arrangements include:

Each of these arrangements requires carefully working out each parent’s respective rights and responsibilities.

In a high-conflict custody case, it may be that despite all efforts on your part to compromise, no satisfactory agreement can be reached. The judge will then have to order custody based on a finding of what is in the children’s best interests. However, demonstration of your parenting commitment and your willingness to negotiate in good faith can be vital to achieving a custody arrangement beneficial to you and your children.

The experienced, knowledgeable and compassionate family law attorneys at Clark & Schloss Family Law, P.C., are ready to help you resolve your child custody dispute in a less contentious manner, if you are willing. Call us at 602-789-3497 or contact us online to schedule a conference at our Scottsdale office.