Choosing Legal Separation as an Alternative to Divorce 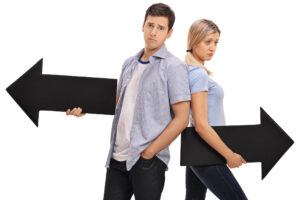 the marriage. Spouses may choose separation over divorce for other reasons as well. For example, some people will not divorce due to their religious beliefs. Also, dissolving a marriage typically has a major impact on the couple’s finances. It might result in valuable spousal benefits being lost or in one spouse having to pay more in taxes.

Another reason to choose legal separation is that a married couple may not be eligible to divorce. Arizona has 90-day residency requirement for filing a divorce case that may not have been met at the time spouses choose to part ways. For a legal separation, it is only necessary that one of the spouses lives in the state at the time of filing. However, if there are minor children of the marriage, they must have resided in Arizona for at least six months before the petition for legal separation is filed.

Must you accept legal separation instead of divorce?

One spouse cannot force the other to accept legal separation instead of divorce. The party seeking a separation must show grounds, namely that the marriage is irretrievably broken or that the spouses wish to live apart. If the other party objects to a separation, the court can convert the case into a divorce as long as the state residency requirement is satisfied. Also, either party can ask the court to end the separation and proceed with a divorce, such as when it is clear that the spouses will not be able to reconcile.

Legal separation cases are most often settled by agreement. However, legal separation sometimes involves complex issues and the terms of any agreement might significantly affect each spouse’s rights and finances. Even if you and your spouse are separating amicably, it would be wise to seek advice and guidance from an experienced family law attorney.

At Clark & Schloss Family Law, P.C. in Scottsdale, we provide attentive and effective representation in family law matters throughout Arizona. To schedule a free consultation with one of our skilled attorneys about your case, please call 602-789-3497 or contact us online.

Mike is the best family law attorney in Scottsdale. Thanks Mike : )